Balfour Beatty cemented its position as the UK’s number one contractor by topping three league tables in December, as clients proved poor weather was no barrier to awarding construction contracts.

In the final month of 2010 it won work worth £223m, excluding civils jobs. The total value of contracts awarded during December increased by 28% to £1.37bn, compared with November’s £1.07bn.

A further £112m of contract wins helped Balfour Beatty top the list for work including civils. Overall, the increase in civils work during December resulted in a total of £1.7bn worth of contracts being awarded. This is despite the heavy snow halting activity on some sites.

The amount of work awarded in December was 41% higher than in November and is evidence that there are still jobs out there for contractors who go looking for them.

A number of large contracts were awarded during December, including the £71m National Football Centre at Burton-upon-Trent in Staffordshire. This prestigious win pushed local firm Bowmer & Kirkland into the top 15 contractors for the calendar year 2010.

However there was little change at the top of the annual table, as Balfour Beatty completed its hat trick.

Lend Lease may be poised to drop the Bovis name from its UK subsidiary, but Bovis Lend Lease was still active and beat off Mace and Sir Robert McAlpine to win a £150m deal to build the second phase of British Land’s Regent’s Place scheme in London.

Between 1 January and 31 December last year, the top 30 contractors won work worth £24.7bn, across a total of 4,281 contracts, resulting in an average contract size of £5.8m. 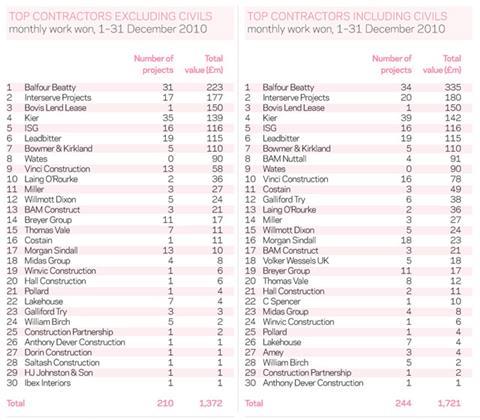 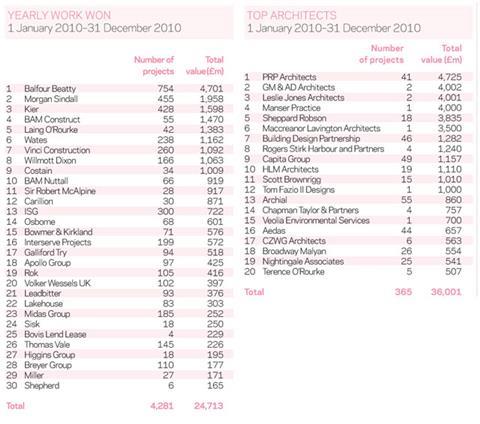 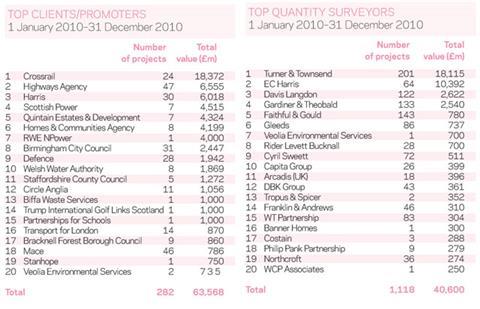