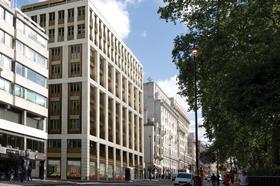 Laing O’Rourke shot back to the top of the contractors’ league table last month with a £212m contract haul.

The development, which is next to department store Fortnum & Mason, involves the demolition of the existing block and the construction of four buildings, including a 10-storey residential building and a commercial office as well as a bespoke HQ for the Kennel Club and affordable housing on Clarges Street.

The contractor’s wins also included a £22m job for Transport for London to build an extension to the station platform at Willesden junction.

Kier came in second behind Laing O’Rourke in the contractors’ league table, including civils, with a £199m contract haul, but topped the table, excluding civils. Kier’s haul comprised 64 contracts.

Galliford Try was the big mover last month, up from 16th in December to third place in both contractors’ tables, with a total haul of£166m.Galliford’s wins included a £38m job to build the Forbury Place office scheme in Reading for M&G Real Estate and Bell Hammer, as well as a £100m contract for 522 homes as part of the regeneration of the Brunswick area of East Manchester.

Overall the CPA/Barbour ABI construction index dropped from 113 in January to 109 last month. This was still 2% higher than a year ago.