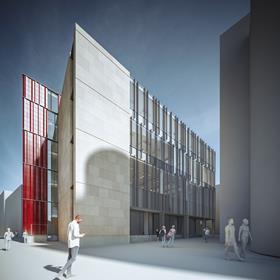 Bam has beaten a host of firms to land a £13.5m deal to build new science teaching laboratories for Huddersfield university.

The firm, which last week posted a 40% hike in underlying operating profit to £18.2m, saw off pitches from seven other bidders, including Kier, Wates and Interserve, to chalk up the win.

The four-storey building (pictured) will include science labs along with office space with work set to start later this year.

The university is carrying out a major estates improvements programme, beginning work on a £30m building for its art, design and architecture departments that has been named after sculptor Barbara Hepwoth.

Designed by AHR, the five-storey scheme is being built by Morgan Sindall. The pair worked together on a £28m building for its music, humanities and media faculties called the Oastler Building, which opened last year.