Construction due to finish in 2023

Bam has formally signed on the dotted line for its largest ever contract by value, a £250m scheme to build a new arena in the shadow of Manchester City’s Etihad stadium.

Called Co-op Live, the 23,500-capacity venue is being built on a derelict plot, owned by City Football Group, the holding company of the Champions League finalists, on the approach to the Etihad stadium originally built by John Laing.

Skanska has begun piling work on the site with Severfield fabricating the arena’s 9,000 tons of steelwork from its structural steelwork plant at Lostock in Bolton while Wates-owned SES is the M&E contractor. Prater has been appointed façade and roofing contractor.

Bam said that at peak, the scheme will have 400 workers on it.

The arena is intended to be a focal point of the Etihad campus and be a rival to the 21,000 capacity Manchester Arena in the city centre which celebrated its 25th anniversary last summer.

Los Angeles-based entertainment developer Oak View Group is behind the scheme, with the venue slated to open in late 2023.

Oak View, which is also behind a new stadium for an NHL ice hockey team in Seattle, hired Populous to come up with designs for the venue which is part of a wider masterplan called Eastlands which proposes a sports tech hub for the area as well as being a retail and leisure destination.

The Co-op Live scheme was given planning last September. 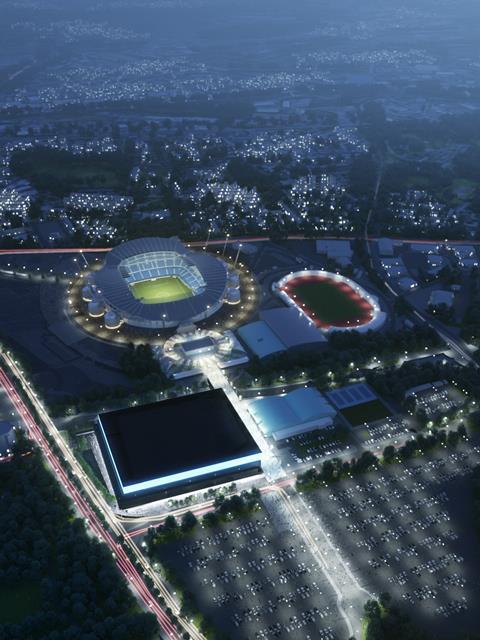 The venue will sit in the shadow of the Ethiad