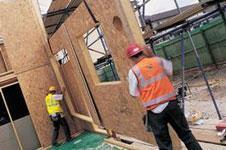 A bloody week for housebuilders in the City is continuing, with Goldman Sachs predicting that the sector downturn could last for three years.

Goldman warned that the sector is "not out of the woods yet" and that the housing market is at the start of a "deep downturn".

As gloom over the sector intensifies, the Square Mile remains focused on fears that debt-laden housebuilders will breach their banking covenants as earnings slump.

But one bank analyst dismissed the notion that banks would press housebuilders into debt-for-equity swaps.

He said: "Banks will not want to make their already weak balance sheets look even worse by adding housebuilders' debt. There's lot of speculation about investors dipping into their pockets to avoid rights issues across the sector, but I think it's more likely that private equity will come in and break some of these large housebuilders up."

City sentiment continues to turn against housebuilders. UBS slashed its target price on Redrow on Wednesday to 169p from 208p, insisting that the likelihood of land writedowns and rights offerings to raise funds is high.

But amid the gloom, one construction analyst insisted there is a silver lining for some.

Grant Daniel, analyst at JM Finn, said: "There has been little sign of the credit squeeze affecting construction and support services. Firms such as Galliford Try and Kier are being dragged down by their housebuilding divisions, but there is real value to be had in those companies right now."

He added: "Excluding housing and the PFI portfolio from the current market cap, Kier is trading on a multiple of below four times earnings, way below the industry average."