BDP has revealed that it is the designer of E.ON’s biomass-fired renewable energy plant at Blackburn Meadows near Sheffield.

The £120m plant, located on a prominent site alongside the M1, is due to be constructed shortly and once operational will use recycled waste wood to generate up to 30MW of electricity, enough to power 40,000 homes.

BDP’s project director Stephen Marshall said: “At 40m high the design responds to the form and appearance of the black clad steel mills which can still be found in the industrial landscape of the Lower Don Valley. Translucent, orange coloured cladding around the central boiler island will visually represent the intense heat at the heart of the process.”

The project also includes extensive landscaping, with a wetland area created on remediated land to promote ecological biodiversity and a sustainable urban drainage system (SUDS) and flood water attenuation. A visitors’ centre for school parties and other interested groups is also included in the scheme.

Building revealed last week that contractor Bam Nuttall had been appointed for the civil engineering package on the power plant. 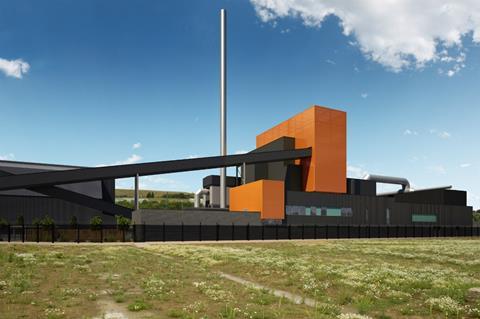