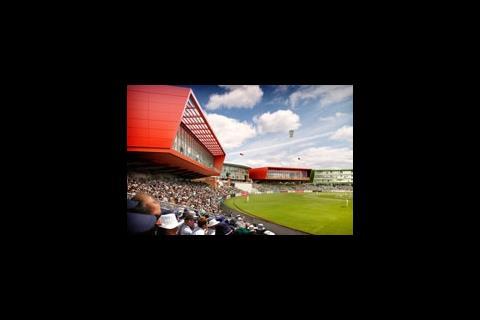 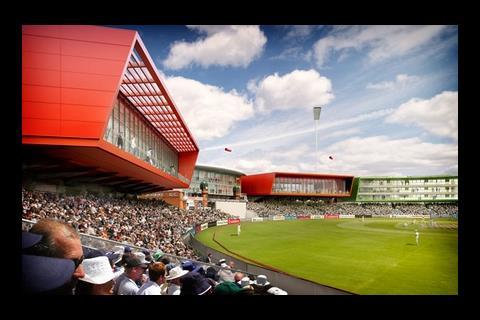 'New Trafford' plans include media facilities, grandstands and a reorientation of the wicket

BDP's designs for the radical redevelopment of Old Trafford cricket ground have been revealed by Lancashire cricket club.

The scheme is part of a sports-led regeneration strategy for a 50-acre mixed-use neighbourhood in Old Trafford. A planning application for the first phase of the new stadium development will be lodged imminently with works potentially starting in early 2009, and phased over consecutive years until completion in late 2012.

The contract win builds on BDP's experience in designing stands and facilities at Aintree and Wimbledon.The plans include enhancing the existing pavilion, as well as adding new player and media facilities, conferencing, banqueting and hotel facilities. Two new grandstands will ensure a capacity of 15,000 capable of rising to 25,000 with temporary seating. There will also be floodlights and a screen showing action replays.

The proposals are being brought forward by a partnership between the club, Trafford council, Ask Developments, Tesco and the neighbouring Stretford High School. They include new facilities offering a host of educational and training opportunities for the local community.

When developed in full the “new” Old Trafford neighbourhood could accommodate in excess of 750,000ft² of new development with a potential end value of £200m, creating more than 2,000 new jobs.

Susan Williams, leader of Trafford council, said: “We warmly welcome the proposals as a basis for wider consultation. We are delighted at the high calibre partnership, who are working together to put forward a project that could potentially bring major investment, jobs and educational and sporting opportunities to the borough and its residents.”

Ken Knott, chief executive of Ask Developments, said: “Ask Developments is delighted to be appointed as Old Trafford's development partner for such an outstanding mixed-use scheme, which will contribute greatly to the borough and see Old Trafford rightfully regain its reputation as a world-class venue.”

And for the cricket buffs …

Part of the first phase will include a new outfield which is currently being installed. The system, based on the design at Lord's, will mean much faster drainage of the outfield, allowing play to commence earlier after heavy rain than is now the case. The designs also include the re-orientation of the wicket, to see the square run from north to south for the first time in 150 years. Changing the original east to west orientation will resolve sunlight issues which have affected players. The new square, which will take 18 months to bed in, will also be larger in size, allowing for five new wickets to be constructed, giving Lancashire cricket club the ability to bid for more high profile matches, including internationals. To allow the wicket to be ready in time for The Ashes in 2013, play would need to begin on the new square in 2011.