BDP eyes overseas work to make up for any Brexit slump 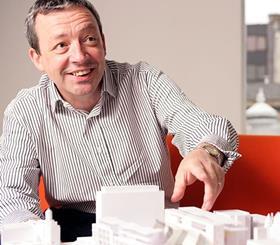 Architect BDP has admitted that it is looking to grow its overseas business to compensate for any fall in UK workloads caused by Brexit.

The country’s second biggest architect employs more than 900 people and carries out more than £70m of its business – around 80% – in the UK.

But in a note signed by chief executive John McManus (pictured) in its latest report and accounts, the firm, which was bought by Japanese firm Nippon Koei for £102m in 2016, said: “The likely outcome of the ongoing Brexit negotiations is ongoing and BDP is focussing on a growing international market for our services to offset any short term reduction in the UK markets during a potentially uncertain period.”

In its results for the year ending 30 June – the first full year since the firm switched its reporting period to this date from a previous year end of 31 December – the firm posted income of £87.7m and pre-tax profit of £8.8m.