A £31.5m cultural scheme by Bennetts Associates in south-east London intended to rival the Southbank Centre has been given the green light.

Five grade II* and grade II listed buildings within the Royal Arsenal in Woolwich will be transformed into a 15,000 sq m creative hub including large-scale concert venues, rehearsal and studio spaces, offices, restaurants, and a base for theatre companies.

Phase 1a and 1b of the scheme, known as the Woolwich Creative District, was actually given planning last October but Greenwich council only announced the news this week after London theatre company Punchdrunk agreed to take space at the complex.

Mace’s interiors arm is already on site carrying out work which will see one of the buildings, known as Building 41, turned into an 1,200-seat venue.

A second phase of the scheme, which includes upgrading other buildings in the area, is still some years away, the council said. 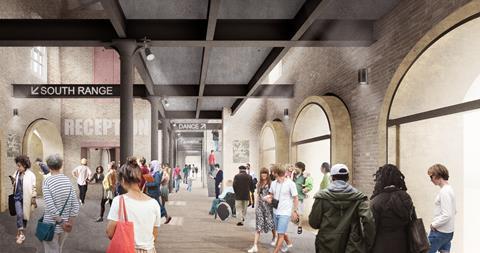 How the foyer area of the completed scheme will look