Billington warns of tough year ahead 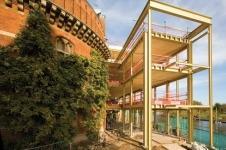 Billington has warned that 2010 will be a very challenging year despite announcing a 30% increase in profit in 2009.

Chief executive Steve Fareham said: "We believe 2010 will be the bottom of the economic cycle for structural steelwork and this, combined with pressure from competitors and predicted raw material increases, will undermine our profitability."

However, that figure fails to take into account a £1.5m cost from the sale of loss-making divisions Dosco and Hollybank to SMT Scharf AG for £1.8m.

The firm, which won a £3.1m deal to supply the steel for the redevelopment of London’s Café Royal in March, reduced its pension deficit from £5.2m to £0.2m during the year.

Peter Hems, executive chairman, said: “Despite challenging market conditions, we have remained profitable and doubled our cash position. The disposal of our loss making non-core assets, Dosco and Hollybank, allows us to focus on our main business of structural steel and building safety systems. ”

“We have continued to build our presence in the health, defence and education markets and are particularly pleased with our progress with private sector clients including supermarkets."