Centred around the Custard Factory creative hub – once the home of Bird’s Custard – in the city-fringe district, developer Oval Real Estate’s plans also include turning a Victorian railway viaduct into a high-level park and opening up a previously-hidden stretch of the River Rea. 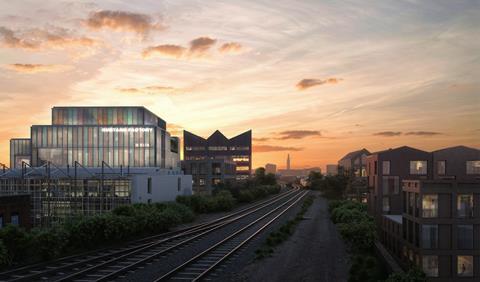 Studio Egret West’s plans for the Custard Factory in Birmingham, seen from the Bordesley Viaduct

Architect Studio Egret West worked with Birmingham-based practices Glenn Howells Architects and Bryant Priest Newman Architects on the proposals for Oval, which acquired the Custard Factory and neighbouring buildings in 2017.

The development framework, which is a hybrid of outline and detailed consent, was approved by Birmingham’s planning committee on Thursday last week and is expected to take 10 to 15 years to deliver.

The Custard Factory is around 500m from the site of a proposed 480-home Darling Associates development for Eutopia Homes, which Birmingham City Council opposed but housing secretary Robert Jenrick approved in March on the advice of a planning inspector.

Oval founder James Craig said the firm was committed to becoming “custodians of the iconic buildings of Digbeth” and understood the need to “nurture the grain of the area”.

“The approval of our hybrid application is a milestone,” he said. “We now have a framework that will protect the area and provide an opportunity for Digbeth to be enjoyed for generations to come.”

SEW co-founder David West said the city council’s approval of the practice’s proposals would conserve the rich heritage of the past, enhance the public realm and create “dynamic new buildings” to support Birmingham’s development.

“The multi layered framework will transform a tapestry of sites including Wild Works, Custard Factory and Bond Company,” he said. “The River Rea will be exposed, the Grand Union Canal will be celebrated, Fazeley Street and Floodgate Street reactivated and Brunel’s Duddeston Viaduct will be turned into a new elevated linear park, Viaduct Park.” The Eastside Metro Extension will add a new one-mile spur onto the West Midlands Metro Network, connecting Digbeth Coach Station with the existing line through the city centre at Bull Street. It will also stop at Curzon Street Station, set to become the Birmingham terminus of HS2.

Duddeston Viaduct was built in the 1840s to link tracks heading south-west from the city with the original Curzon Street Station. However the link was never completed. The Bordesley Viaduct also runs through Digbeth carrying train services to and from Marylebone Station in London.