Bouygues to be replaced on Battersea Power Station job

French contractor Bouygues is to be replaced on the third phase of the redevelopment of the iconic Battersea Power Station in London.

The firm was appointed to the Frank Gehry and Foster + Partners-designed residential-led phase in September 2015, on a contract expected to worth in excess of £1bn.

The phase as originally designed included 1,300 apartments located immediately to the south of the grade II-listed power station, alongside the planned new Northern Line tube station.

In a joint statement the client, Battersea Power Station Development Company (BPSDC), and Bouygues UK, said they had mutually agreed not to extend the deal beyond the pre-construction stage and Bouygues’ work will be handed over to a new contractor. 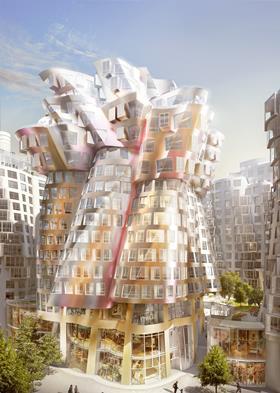 Frank Gehry’s design for one of the phase three buildings

The statement said: “Battersea Power Station and Bouygues UK have mutually agreed not to extend Bouygues UK’s involvement in the project beyond the current scope of pre-construction services which Bouygues UK had been appointed to perform on Phase 3 of the development.

“On behalf of the project, Bouygues UK has been managing the design, procurement and site activities, and continues to do this with Battersea’s full support. These services will be wound down over the coming months as part of the hand-over and transition process to a new contracting partner.

“Battersea Power Station is in discussions with some of the UK’s leading contractors for this next phase of the scheme.

“This change in contracting partner does not affect the current progress on site as the trade contractors such as Balfour Beatty, McGee and others, are already directly appointed by the developer and their ongoing management will continue to be undertaken by the incumbent project team, including Bouygues UK during the transition.”

At the time of Bouygues appointment Aidan McLeod, project manager at BPSDC, told Building Bouygues had been selected as the preferred contractor due to it being able to deliver the building’s concrete frames itself without having to subcontract it. BPSDC viewed the concrete frames “as one of the biggest project risks and they [Bouygues] described a fabulous proposal to deliver it and remove a great deal of risk,” McLeod said.

He added the French contractor was also “less focused on risk and more focused on delivery and solutions”.

Fellow contractor Carillion was appointed to £400m first phase at the £8bn 17ha site back in May 2013, while Mace carried out pre-construction works on phase two prior to Skanska taking on the main role on the second phase, which has seen the removal and reconstruction of the power station’s iconic chimneys.

In September last year tech giant Apple agreed to pre-let 500,000 sq ft across six floors inside the historic Sir Giles William Scott designed building within the central Boiler House. The letting equates to 40% of the total office space available at the development.

Apple is expected to move into the Power Station in 2021, which will become its new London campus with the firm’s 1,400 employees to relocate from Apple’s other London offices.

Malaysian shareholders Sime Darby, SP Setia and The Employees Provident Fund own the scheme which is managed by the BPSDC.

Bouygues UK last autumn revealed that it had racked up a pre-tax loss of t £19.4m which it attributed to “ongoing challenging market conditions”prior to it walknig away from the £90m job to build Bristol’s new Populous-designed arena at the beginning of this year after failing to agree a price with the council.