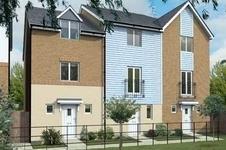 Housebuilder overcomes last year's £78.7m pre-tax loss on the back of £281.5m turnover

Bovis Homes has announced pre-tax profits of £4.8m in its preliminary results for 2009, up from a pre-tax loss of £78.7m the previous year.

Commenting on the results, David Ritchie, the chief executive of Bovis Homes Group said: "The Group has successfully delivered on its strategic objectives for 2009: achieving a pre-tax profit, increasing private homes reservations in the year by 82%, reducing overheads by 34% and generating £221m of cash inflow including the £59m benefit of an equity placing”.

The Group has successfully delivered on its strategic objectives for 2009

Bovis Homes has acquired four consented sites in the last quarter of 2009 and agreed terms in principle at the year end on a further 15 sites, all of which have been progressed during the early part of 2010.

The company reports £112m of net cash in hand at 31 December 2009 positioning it well to increase output as markets recover.