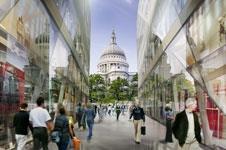 The Australian firm, which is working on Jean Nouvel’s One New Change shopping centre next to St Paul’s Cathedral and the £252m contract to refurb the BBC’s Broadcasting House said it was putting safety first.

A spokesperson for Bovis Lend Lease said: “The safety of our workforce is paramount and all staff based in or travelling to central London have been provided with security guidance as recommended by the Metropolitan police.

In cooperation with the police, and in agreement with our clients, we have suspended operations on some sites in central London. We have increased security as a precautionary measure and are continuing to closely monitor the situation.”

It refused to say which sites had been shut down.

City police had previously issued guidance to site managers that all objects that could be used as missiles should be removed.

19 people were arrested after protestors broke into the Royal Bank of Scotland building and broke windows.