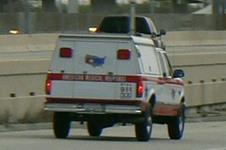 A 24-year-old Brazilian construction worker has survived after a 6-foot metal bar fell from above and pierced his head.

The bar fell from the fifth floor of a building under construction, went through builder Eduardo Leite’s hard hat, entered the back of his skull and exited between his eyes.

Miraculously Leite was conscious when he arrived at hospital despite having the bar lodged in his head and told doctors what had happened, the Associated Press has reported.

Surgeons at Rio de Janeiro’s Miguel Couto Hospital were able to successfully withdraw the iron bar from his skull during five-hour surgery.

Luiz Alexandre Essinger, chief of staff at the hospital, said: ‘”He was taken to the operating room, his skull was opened, they examined the brain and the surgeon decided to pull the metal bar out from the front in the same direction it entered the brain.”

He said Leite was lucid and had “few complaints” after the surgery: “He says he feels little pain.”

Ruy Monteiro, the hospital’s head of neurosurgery, told the Globo TV network the bar entered a “non-eloquent” area of the brain, an area that doesn’t have a specific, major known function.

The accident and surgery took place last Wednesday. Leite is expected to remain at hospital for at least two weeks and doctors said there was still a risk of infection.