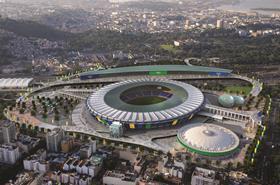 Fifa boss Sepp Blatter has slammed Brazil’s preparations to host the World Cup this year, claiming that no previous nation has been so far behind in its preparations.

Brazil has been struggling to meet its construction deadlines, with six of the 12 host stadiums failing to meet the 31 December completion date, while delays have also hit hotels, airports and roads.

Work on three stadiums is likely to go on to mid-April, just over a month before the start of the tournament on 12 June.  This includes the Itaquera Arena in Sao Paulo, which will host the opening ceremony, where two workers died in November.

In an interview with Swiss newspaper 24 Heures, the Fifa president said Brazil had had seven years to prepare for the event, whereas previous hosts only had six years or in some cases less, but the country had failed to take account of the scale of work required to host the World Cup.

He said: “Brazil has just found out what it means and has started work much too late.

“No country has been so far behind in preparations since I have been at Fifa even though it is the only host nation which has had so much time - seven years - in which to prepare.”

The Brazilian government announced it would be completed in February, only for Fifa to confirm another deadline of 15 April a day later.