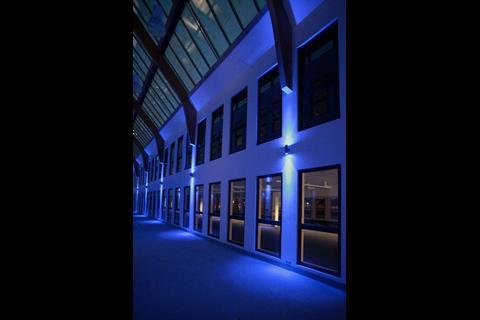 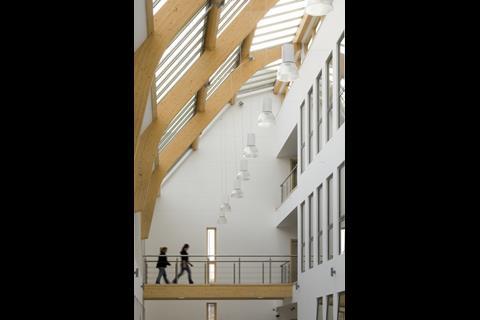 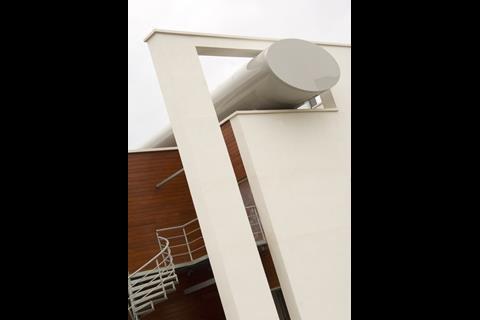 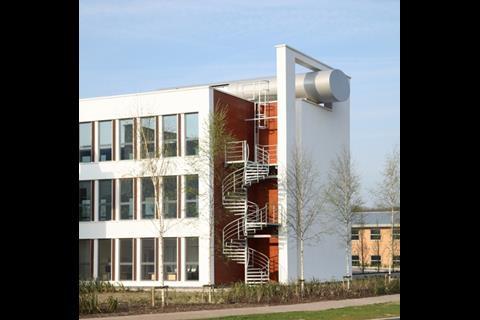 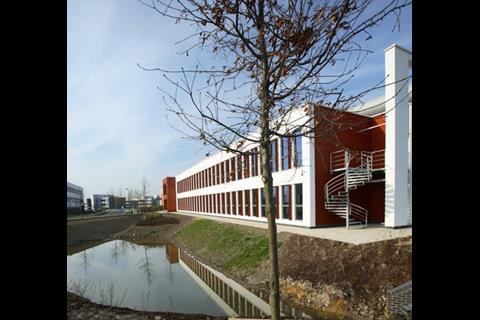 The new £5.5m Innovate Office is pretty remarkable: its carbon dioxide emissions are predicted to be more than 80% less than for a typical office building; it has been awarded the highest ever BREEAM score of 87.5%; and the team reckons its green credentials are key in making it more rentable. “The reduction in energy consumption represents a saving of approximately £1.30 per sq ft each year,” explains Doug King, the sustainability engineer on the project. “When compared to the expected rental returns of £12-£15 per sq ft, the energy savings will make a significant contribution to the scheme’s profitability.” This project also satisfied the client’s requirement for a cost-effective building, flexible enough to accommodate tenants in serviced office units.

How have they done it? King, founder of engineer King Shaw Associates, says the impetus to design a sustainable office building came initially from Rio Architects, which had already completed one office scheme for the client, Innovate Property.

When King Shaw was brought on board in autumn 2002 the aim was to achieve a BREEAM “excellent” rating. The engineering concept evolved over six months of intensive design and complicated computer modelling by IES Consulting. The scheme was then benchmarked against flagship low-energy schemes such as BRE’s Building 16, near Watford, and the Elizabeth Fry Building at the University of East Anglia.

Daylight was a fundamental concern. “This building is so well insulated it has virtually no heat demand, which means it is easy to control the heating but we had to work much harder to control the daylight levels,” says King. The building comprises two parallel blocks – one two storeys high, the other three storeys – linked by a glazed roof to form an enclosed “street”. The two wings are offset to create a simple glazed entrance to the south-west corner. “The two-wing form with a central street was the result of the need to get enough daylight to the ground floor,” King explains.

The long axis of the two wings runs north to south, while the two-storey block is sited slightly farther to the east to reduce the building’s scale when viewed from the access road. More importantly, this orientation allows early morning daylight to penetrate deep into the heart of the building through the street’s glazed roof. King says the engineers did not want a south-facing elevation “because the brise soleil would cut out too much daylight”.

In total the window areas cover just more than 50% of the external elevations. Internal blinds are provided to control excess heat gains and to reduce glare. As a result of the engineer’s attention to daylight, the offices achieve a 4.5% average daylight factor. According to King, this means electric lighting will be required for only 20% of the working year. All fittings include a daylight sensor and presence detectors to ensure the lights do not remain on unnecessarily.

The building’s concrete structure is also a significant factor in its environmental performance. “I wanted as much thermal mass as possible,” King emphasises. To enable the building to act as a thermal store King Shaw persuaded the structural engineer, Cameron Taylor, to opt for a panelised structural solution. The design therefore utilises 125mm thick, load-bearing, pre-cast concrete wall panels combined with pre-cast, hollow-core TermoDeck ceiling units (the ground floor is a suspended pre-cast concrete slab but without the hollow core).

TermoDeck is a fan-assisted ventilation system that pushes treated fresh air through a series of ducts formed within the individual concrete ceiling/floor slabs. As the air passes along the ducts the concrete warms or cools the fresh air before supplying it to the occupied space.

Each pre-cast unit incorporates four window units and the wall panels adhere to a 1.5m planning grid. Vertical fins between the windows provide additional solar shading. There is no fenestration to the offices on the north and south facades, which keeps solar gains and losses to a minimum, while the concrete walls and ceiling are exposed internally to give the interior a high thermal mass.

Sustainability has even been carried into the materials used in the offsite manufacture of the concrete wall units. The concrete incorporates pulverised fuel ash cement replacement and Lytag aggregates, and recycled steel reinforcement. The concrete shell is finished externally with a 250mm layer of polystyrene insulation with a white Sto-rendered finish, giving a U-value of 0.15W/m2/ºC, which substantially exceeds the 0.35W/m2/°C required under the Building Regulations. “The insulation makes the building behave just like the old-style electric storage heater,” King explains.

TermoDeck proved to be the best solution to a number of design challenges. There was concern that passive design would not sell, so using TermoDeck has enabled the offices to be marketed as conditioned space. From King’s perspective, TermoDeck also made sense because the offices’ internal heat gains are too high, at the design occupancy density, to be met through passive means alone. “Our initial calculations showed a demand of about 150kW of cooling,” he says, “but when you take into account the night cooling using TermoDeck, the cooling load can be reduced to about 50kW, which is well within the reach of an absorption chiller.”

The idea of using an absorption chiller led to the concept of utilising waste heat from a CHP engine. “It brought into play the idea of having a summer-time heat sink for a CHP system,” says King. In fact, two chillers have been installed – the absorption chiller does about 35kW of cooling while a 20kW electric chiller makes up the remainder of the load because, King says, 50kW absorption chillers were not available.

The principal summer cooling strategy is to use passive night-time cooling to chill the TermoDeck slabs and then to use the building’s thermal mass to store the additional cooling energy provided by the chiller, which is run 24 hours a day, at periods of peak overheating. “We developed this idea of using an optimiser, and a controls strategy similar to that used for an ice-storage cooling system, to run the absorption chiller continuously during periods of likely overheating,” says King.

Understanding TermoDeck’s performance was critical to the scheme’s success. IES Consulting developed software specifically to model the heat-exchange process within the slabs. The simulation modelling also allowed King Shaw to derive a novel operating strategy for the building management system based on the detailed analysis of hourly thermal data from the simulation modelling.

“We worked then with the controls specialist to come up with a strategy to maximise the use of CHP,” says King. CHP does not modulate down; it is either on or off. When the system is on, the entire heat load generated by the CHP engine has to be utilised or the system will shut down. This problem is exacerbated when there is a small demand for heat.

“The CHP will fire up for 30 seconds, put a slug of water into the system and then shut down,” King says. “But if you wind the system back so that the CHP engine does not keep switching on and off, then the system’s boiler is likely to fire to meet the heat load – and so the CHP hardly runs.”

King’s solution to maximise the use of the CHP has been to put in a wide dead-band (of +/- 1.5C) on all the control set-points. “There is a clever little bit of programming that looks at the simultaneous demand right across the building while all settings are in their dead-band,” he explains.

As soon as a zone starts to call for heating, the BMS adds up the available capacity within the dead-band by totalling the heat requirement of all zones that are within that band, to try to create enough of a heating load to warrant starting the CHP engine. Once the CHP has fired up, it will run until all the zones are at the top of their control dead-band before shutting down the system. “I estimate the CHP will give nearly 6000 hours of operation because the building has so much thermal lag,” says King.

In winter, the air system is put on full recirculation overnight to preheat the TermoDeck slabs prior to the offices being occupied. The heat recovery air-handling units collect the heat gains from people and computers and store them in the concrete. This heat is then transferred to the incoming fresh air.

Fresh air to the offices is supplied from four roof-mounted air-handling units with fully modulating speed control. These units are housed within fibre-reinforced shrouds, which look like fuel tankers parked in the four corners of the roof. Service risers from these units drop down at both ends of the office wings to supply air to the TermoDeck panels.

Each floor is zoned east to west. This allows part or all of a floor to be shut down depending on occupancy. The 3°C control dead-band allows variations in office temperature to be accommodated across each zone. And if the occupants need more fresh air, they have the option of opening the windows.

Water services, too, have been designed with sustainability in mind. The building uses rainwater harvesting, coupled with a vacuum drainage system, to eliminate the use of treated mains water for flushing toilets almost entirely. The vacuum drainage system resembles that used on ships. The vacuum takes waste away so the treated rainwater is used only to wash the bowl.

“This solution reduces by 75% the overall sewage volume discharged,” says King. An additional advantage of the system is that it has allowed the designers to run pipework uphill and over partitioning.

The building’s design exploits the site’s natural gradient. Originally its owner proposed scraping 70,000m3 of topsoil from the site to level it. King says he managed to put a stop to this with just days to spare. As a result the design team has used the area’s natural fall to their advantage: permeable paving, a lined pond and a wetland area allow storm water to be retained on site instead of discharging into the offsite drainage.

The building’s significant level of sustainable features soon made it clear the design would get a high BREEAM score. How high became obvious only once the designers had spoken to the BREEAM assessor, who suggested the scheme had the potential to top the league of BREEAM-assessed buildings.

To ensure its success, the obligatory cycle racks were added in the car park, and the scheme’s mechanical and electrical contractor, Goodmarriott & Hursthouse, donated 10m lengths of ductwork to ensure that the air handling unit’s supply and exhaust duct were separated by that distance, which gained an extra BREEAM point.

With the project complete, the first tenants are starting to occupy the offices. As a result of the engineering-led design, King predicts that the C02 emissions from the comfort-cooled building will be substantially lower than for a typical air-conditioned office and on a par with the best naturally ventilated buildings. “Annual emissions from the building services are predicted to be less than 22kgC02/m2, a reduction of more than 80% compared with a typical office building, saving more than 350 tonnes of C02 a year,” says King.

Such claims help to explain why the scheme won Environmental Initiative of the Year at the Building Services Awards 2007. To see if this engineering-led design solution lives up to those claims, Leeds University will monitor the building’s performance for the next two years. We’ll keep you posted.

For the original article, including a diagram of the site and a video run through of the project, go to the Building Services Journal website