The UK’s decision to leave the European Union has prompted the widespread cancellation of projects and increased the likelihood for developments to stall, a new RIBA survey has found.

The institute’s poll of more than 1,100 architects also uncovered a picture of rising materials and construction costs, coupled with recruitment and retention issues in the wake of the referendum result last June.

According to the survey findings, four in 10 non-UK EU-national architects working in this country have considered leaving since the referendum result, while just over one-in-five architects said they were looking to increase their overseas work following the result.

RIBA president Jane Duncan (pictured) said it was vital that the government took steps to ensure that the profession was well supported in the post-Brexit world, with access to the best talent, open doors to foreign markets, infrastructure investment and properly-resourced education, research and innovation opportunities.

The survey, which opened in December, asked architects about how they expected the UK’s departure from the EU to affect them professionally. Just over 68% said they expected the effect to be “negative” or “somewhat negative”.

A total of 61% of respondents said they had seen projects delayed or put on hold as a result of the referendum, while 37% said projects had been cancelled. Just 12% said new work had arisen because of the “new context”.

RIBA also asked non-UK European Union nationals working in the architecture profession for their sentiments following the referendum. Forty per cent said they had considered leaving the country in the wake of the vote.

The survey also found slightly more than 20% of respondents indicating an increased interest in sourcing work abroad, both inside and outside the EU.

Presented with a list of options for government support for the profession, “increased public sector investment” garnered the most interest. 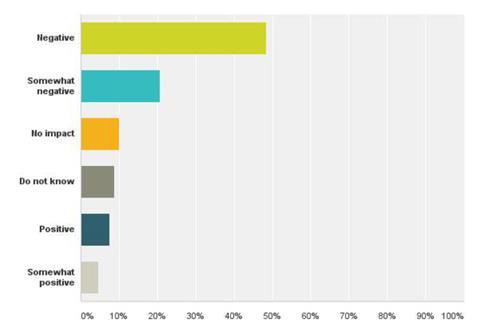 What impact do you see the referendum outcome having on you as an individual professional?

Duncan said architects were already responding to the UK’s need to shape a new role for itself but that a wide-ranging package of support was necessary for the profession to maintain and strengthen its role as a global centre for architecture.

“To do that we need the government to secure the agreements that ensure that our qualifications continue to be recognised in the EU and increasing access to new markets outside of the EU,” she said.

“I’m pleased that the government’s Brexit White Paper highlights a number of the key issues that we’ve been raising with ministers, but there is still a long way to go – particularly on the issue of who can work here.

“We can’t shut our doors to talent and expect the world to open its markets to us.

“The UK needs an immigration system that recognises the benefits and importance of the UK being an attractive place to work for ambitious architects from around the world.

“It’s vitally important that the government acts to confirm that those already working and studying in the UK will be able to remain.”

Duncan said ensuring that common product and environmental standards were maintained would also be crucial.

A breakdown of the survey showed that the biggest single group of respondents were equity partners, shareholder directors and sole practitioners.

A clear majority of respondents were in southern England, with 44% describing themselves as based in London and a further 12% in the south and south east.