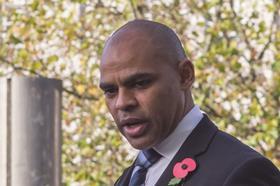 Bristol mayor Marvin Rees has said he is open to proposals from a US investor to rescue the £156m city centre arena scheme he cancelled at the start of the month.

Rees (pictured) told Building he would be “very interested” if a US investor, understood to be Oak View Group, that met with city council officials two weeks ago, decided to table a bid to build a concert venue on the site.

His comments come amid a deepening political row in the city over the arena, with supporters of the original Populous and Feilden Clegg Bradley Studios scheme, which was to have been built by contractor Buckingham Group, accusing the Labour mayor of being biased against the project.

The row follows the city mayor’s decision, backed by the council cabinet, to terminate the existing scheme, citing cost rises, and instead explore a proposal by Legal & General for a mixed-use scheme with conference centre on the same Temple Island site, next to Temple Meads train station.

Senior executives from Oak View Group were told by council officials, including Rees’ head of office, Kevin Slocombe, that the site was not available. Slocombe later said the US firm had agreed the site would not work for an arena. However, Bristol property developer Stephen Fear, acting as intermediary for Oak View Group and who was present at the meeting, denied the executives said this, and said they are now working with their consultants to decide whether to table an offer.

Rees, who promised in his election campaign to deliver the arena, described accusations of impartiality over the scheme as “nonsense”, and said: “If you can get him [Stephen Fear] to confirm categorically that they’re interested in Temple Island, I’d be very interested in that.”

Rees said the decision to terminate the existing scheme was made because of the potential impact on the council’s already stretched finances. A report by KPMG, commissioned by the council, found L&G’s scheme would likely create an extra £500m of economic benefit for the city. Rees said: “My question is what is your appetite for risk […] in a time when music venues are difficult to make stack up.

“At some point someone has to stand up and say this is a huge gamble. You can’t run a city on crossed fingers.”

Architect George Ferguson, who promoted the Temple Island scheme while mayor of Bristol prior to Rees, described the decision to cancel it as “utter madness”. 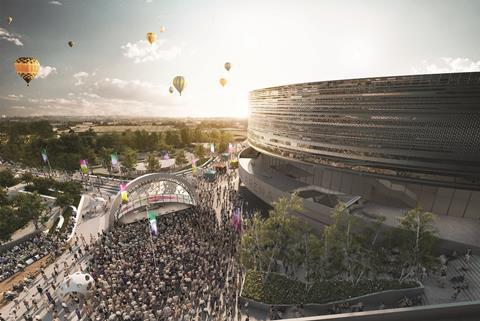 What the scrapped Populous scheme would have looked like