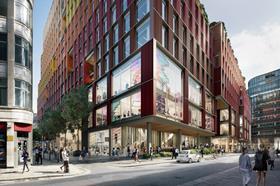 The retail sector’s High Street woes hit Meadowhall shopping centre owner British Land as the firm crashed to a £42m loss in the first half.

The developer said “challenges in the market” sent its numbers into the red after recording a £238m profit a year ago.

Chief executive Chris Grigg said: “We expect retail to remain challenging in both the occupier and investment markets as the impact of long-term structural change is compounded by short-term headwinds.”

But the FTSE 100 company said it was looking at up to 5,000 build-to-rent (BTR) housing units across its sites including its huge revamp of Canada Water which is being headed by Roger Madelin, the man behind Argent’s revamp of King’s Cross.

Grigg said it was in discussions to snap up a BTR operator and added: “Build-to-rent is a new area of focus for British Land but is complementary to our existing expertise and is an important part of our mixed-use vision. The market is underpinned by sound fundamentals.”

It added that work on Canada Water scheme could begin in earnest in the second half of next year.

Last month Building revealed that Mace, Wates, Kier and Laing O’Rourke are all competing for the first two buildings, known as A1 and A2, which have been designed by Allies and Morrison.

And the FTSE 100 company said there was better news for its office work in the capital where it is redeveloping Broadgate, next door to Liverpool Street station in the City.

Grigg added: “Demand for the highest quality London office space is expected to continue, but we remain alert to potential uncertainties as the Brexit process unfolds.”

Sir Robert McAlpine is carrying out work on the 100 Liverpool Street for British Land while the contractor is expected to begin on the developer’s 1-2 Broadgate mixed-use scheme (pictured), designed by AHMM, in 2020.

Landsec yesterday revealed it had posted a pre-tax profit of £42m in the six months to September, 24% higher than the £34m posted in the same period last year.

Like British Land, the traditionally commercial developer also revealed it was working on plans for more than 4,000 homes across its suburban London retail sites.

It said it planned to submit plans for its schemes in Finchley Road and Shepherd’s Bush in the first half of 2019 with the pair set to have a total development cost of around £1bn. The developer also flagged the potential for a new town centre in Lewisham.