Brokenshire told retailer Sainsbury’s last month that it would have to ditch its plans to build nearly 500 homes on the site of a supermarket in Whitechapel.

Now he has pulled the plug on plans by architect Studio Egret West for a 327-home scheme at Chiswick in west London.

His decision means he has flown in the face of a planning inspector who recommended the Chiswick Tower scheme be approved after developer Starbones, a subsidiary of Galliard Homes, appealed a decision by Hounslow council to turn it down two years ago.

The Studio Egret West scheme proposed a mixed-use scheme of 25 and 32 storeys.

But Brokenshire said the proposal’s impact on the Kew Gardens World Heritage Site, and the Strand-on-the-Green, Kew Green and Gunnersbury Park conservation areas needed to be given “great weight”.

Historic England regional director Emily Gee welcomed the decision and added: “This building would have had a serious impact on areas in west London whose historic character has remained largely untouched for centuries.” 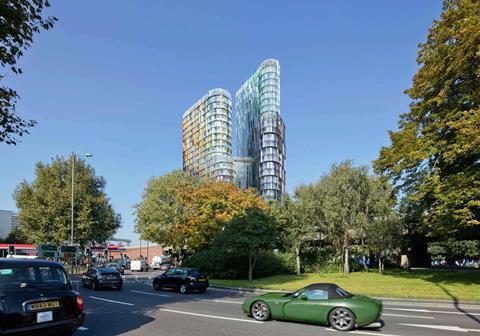 How the scheme would have looked