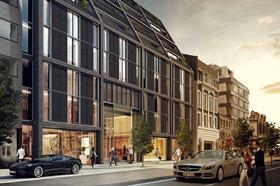 The development on Burlington Gate is a nine-storey mixed-use development compromising 42 luxury apartments, a residents’ gym and spa, and 25,000ft2 of retail space designed for art gallery use.

The value of Brookfiled Multiplex’s contract is approximately £50m, while the overall gross development value of the scheme is £225m. The project is due to be completed by the end of 2016.

At Burlington Gate, over 80% of the apartments have already been sold, with sales reaching an average of £4,000 per ft2.

In March, Lipton Rogers confirmed it had retained Brookfield Multiplex to build 22 Bishopsgate on the former Pinnacle site, also in the City of London.

Brookfield Multiplex also reported a string of major project wins in 2014 worth over £1bn, including the £150m One Blackfriars scheme for St George and the £140m Centrepoint redevelopment for Almacantar.

Speaking to Building in April, Brookfield Multiplex’s EMEA chief executive Ashley Muldoon said he expected the UK business would hit turnover of £1bn-1.2bn in 2016 and that the firm had a total pipeline of signed or preferred bidder status work of £3bn.