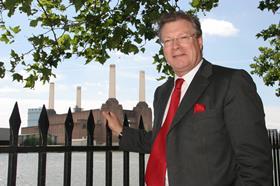 Michael Dickson, one of the co-founders of engineering practice Buro Happold, has died aged 73.

Dickson (pictured) joined Ove Arup in 1968, leaving eight years later with Ted Happold to form the new company in Bath. He became chairman of the practice after Happold’s death in 1996, leading it for another nine years.

He was instrumental in numerous projects around the world, including a large-scale stainless-steel mesh aviary for Munich Zoo, subsequently copied in the US and Hong Kong, and the Savill Building Visitor Centre at Windsor Great Park, featuring the largest timber gridshell roof in the UK.

Dickson also served as a member of several leading industry bodies, including president of the Institution of Structural Engineers in 2005/06, and was awarded a CBE for services to engineering in 2005.

He leaves a wife, Effie, and two daughters.