Alan Brown has been with the housebuilder since 1986 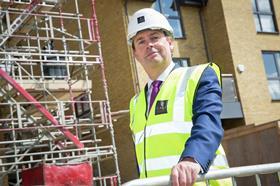 Cala Homes chief executive Alan Brown is retiring at the end of the April after more than 30 years with the Scottish firm.

Brown (pictured) joined the housebuilder in 1986 as a development manager for the group’s southern operation and was later appointed managing director of its Midlands business.

The 57-year-old joined the group’s main board in 2007 and became chief executive two years later.

Cala, which in March this year was bought out by L&G, said it had kicked off the search for a new chief executive.

Brown will be replaced by Graham Reid, the firm’s finance chief, on an interim basis from the beginning of next month.

Brown said: “When I took over as CEO, the company had significant challenges and as a team we’ve worked extremely hard to overcome those challenges and build a large and very successful business that now enjoys the long-term support of one of the UK’s blue chip companies.”