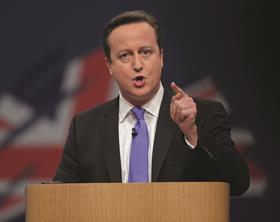 The scheme is one of the key recommendations is HS2 chairman Sir David Higgins’ report on the second phase of HS2, published later today.

Higgins will argue HS2 should be used as a catalyst for further rail investment in the north, including the construction of a fast Leeds to Manchester rail link, which could halve the current 55 minute journey time.

Higgins also calls for the transport authorities of five northern cities to come together to form transport umbrella body ‘Transport for the North’.

In a joint statement prime minister David Cameron and chancellor George Osborne backed the report and both of these key recommendations.

Higgins is expected to confirm the HS2 route will branch north from Birmingham to Crewe and Manchester city centre in the west, and the east Midlands, south Yorkshire and Leeds in the east.

He is expected to confirm the south Yorkshire station will be at Sheffield Meadowhall, despite calls for a city centre alternative.

The four main proposals in Higgins’ report are: