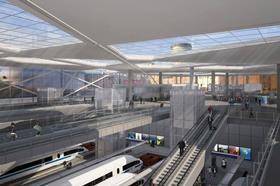 The Qatari royal family is in talks with David Cameron about pumping billions of pounds worth of investment into regeneration projects being planned around the hubs of the new HS2 line, according to the Financial Times.

During a visit to the UK last month, the paper reports that the emir of Qatar told the prime minister that he wanted to take advantage of new projects that along the line of the proposed rail line.

The FT reports that Cameron and the emir very briefly discussed how the Qatari sovereign wealth fund might put money into HS2 and British officials had more detailed discussions with their Qatari counterparts.

According to officials from the gas-rich Gulf state, the potential investment was one of the major topics of discussion during the emir’s visit, and Doha is now waiting for further information from the UK government.

The FT reports that sources close to the project have indicated that the Qataris are particularly interested in investing in the regeneration scheme planned around the new station at Curzon Street (pictured) in central Birmingham where 2,000 new homes and 600,000m2 of office space are planned.