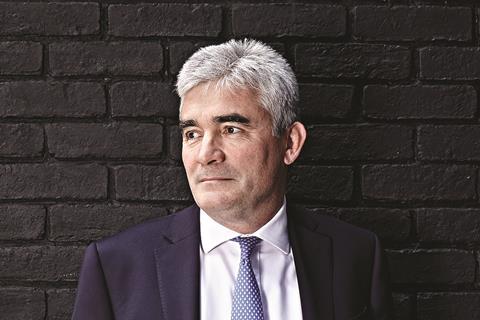 Incoming Carillion chief executive Andrew Davies is expected to completely rebuild the firm’s senior management team as he plots a strategy to return the stricken contractor back to profit when he joins next spring.

The highly regarded Wates boss, who has spent the past few days on holiday, will be back at Wates’ Leatherhead headquarters on Monday to tie up loose ends before saying his goodbyes to staff at the end of the week.

Carillion has been without a full-time chief executive since July, when former boss Richard Howson stepped down in the wake of the firm announcing huge writedowns on problem contracts.

Howson was replaced by the former chief executive of engineering firm Weir, Keith Cochrane, who has been carrying out the role on an interim basis.

Davies will have to wait until the beginning of April next year to formally take over from Cochrane – although insiders said Carillion had done well to get him to join so early.

“Any CEO has a 12-month lock-in so they’ve been lucky to get him for then,” one said. “Carillion has got to rebuild its executive capacity. They’ve been haemorrhaging decent staff at a big rate. Now Andrew is joining them, any decent staff they have left might be tempted to hang around.”

And one Carillion insider said the news was a fillip following months of relentless bad news, beginning over the summer with an £845m writedown, which then jumped to £1.1bn by the time the firm published its interim results at the end of September.

“I’d like to think he wouldn’t have signed up if he didn’t think [we] would survive,” said one insider.

Cenkos analyst Kevin Cammack said that landing Davies was a coup for the firm: “Probably as good or better a hire as Carillion could have hoped for,” he added.

Insiders reckon Davies will have had to sign a deal not to raid Wates for senior staff when he begins his rebuilding operation.

One added: “It’s a long-term project. It will take a good five to eight years to get that business in a good place. But he’s capable of doing that. He’s a thinking man, very analytical.”

Another rival contractor said Carillion was not quite the basket case its recent financial performance would suggest: “They’ve got an amazing portfolio of FM contracts with good clients. It’s solid work and has got scale. It’s an opportunity to take that business back to its former glory. They lost touch with what their heritage is, and what they still do is big complex jobs.”

Davies’ decision to join Carillion ends a nearly four-year stint at the £1.5bn turnover private contractor Wates, which is chaired by James Wates and has plans to become a £2bn firm in the future.

Wates moved quickly to calm any nerves at the firm by installing chief financial officer David Allen as acting chief executive last Friday, ahead of a decision on whether to make an internal appointment to replace Davies or once again look outside the business for a new chief.

Both Davies and his predecessor, Irishman Paul Drechsler, were external appointments. Sources told Building that Wates is expected to make clear in the next few weeks whether it will be looking internally or externally to replace Davies.

Carillion this week sold off its stake in a commercial and property development business for £14m to property firm Dukehill. Last month it sold off most of its UK healthcare management arm to Serco for £50m.