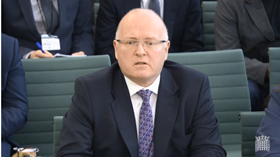 While declining to label the proposal as a bailout, Cochrane (pictured) said the firm had sought out short term government assistance.

Facing the parliamentary joint committee inquiry into Carillion’s collapse, Cochrane said: “We remained very hopeful of government granting us that short term funding. Our final proposition we sent to government at 7pm on the Saturday evening was for a staggered approach to funding.

“Essentially in total over a four month period it was for support of £160m but we’d also put forward a proposition that was more week by week.”

He said the week by week plan would see both government and the banks commit £10m, with the intention of this repeating from week to week subject to review.

Cochrane said: “From our perspective we got the banks on board, certainly for another £20m. It was all about creating some runway to get to the point where we could launch the full scale restructuring program.”

He said the firm had been in constructive discussions with groups willing to provide long-term financial support, while conversations with the pension fund as to how they could suport the restructuring were also underway.

Labour MP Rachel Reeves, chair of the Business, Energy and Industrial Strategy committee, asked whether Cochrane had expected a bailout because he considered Carillion “too big to fail”.

In response, Cochrane said: “I certainly didn’t think about it as a bailout. Those funds would have been repaid in April.”

He added: “Essentially the government was our largest customer. They accounted for 45% of the revenues of the business. It is entirely natural for one to approach your largest largest customer…for support. This was about reaching out to all our important stakeholders to help secure the future.