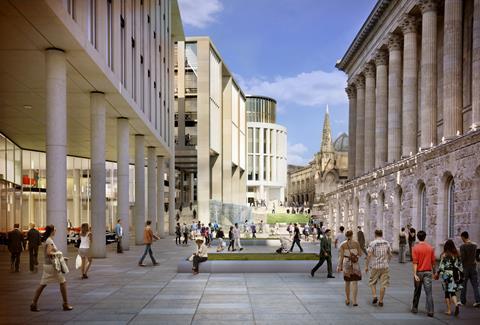 Carillion has won the job to undertake preparatory works for the £450m Paradise Circus development in Birmingham.

As Building revealed in February, Carillion was up against Bam Construction and Kier for the job, worth around £30m, to undertake enabling and first phase infrastructure work on the massive city centre scheme.

The developer of the scheme, a joint venture between Birmingham council and Hermes Real Estate, today confirmed Carillion had won the job.

The contract win means Carillion will be well-placed to win further work on the huge 1.8 million ft2 project, which includes offices, shops, a four-star hotel, a concert hall and further leisure and culture facilities.

Argent is acting as development manager on the scheme, which will be built across 10 new buildings and 17 acres in a prime site in the heart of Birmingham between the city’s Centenary Square and Chamberlain Square.

The enabling works are due to start this autumn and with the first infrastructure work to begin early next year.

Rob Groves, senior project director for Argent said: “The project is now moving forward very rapidly with activity planned to start on site later this year, on the first phase of the major redevelopment of this key part of the city centre.”

The appointment comes after the developer announced earlier this year that four landscape architects had been shortlisted to design public space at Paradise Circus. The shortlisted firms are Gillespies, Grant Associates, Gustafson Porter and Gross Max.

A clutch of consultants are also working on the overall scheme, including architect Glenn Howells, engineer Arup and quantity surveyor Faithful + Gould.

Last month Building revealed that work on the long-stalled £500m Arena Central Development is finally set to get underway, with, with architect Make appointed to design the scheme’s first office building.

The announcement was seen as a further sign of the market turnaround in the regions - and in particular the return of speculative office schemes.