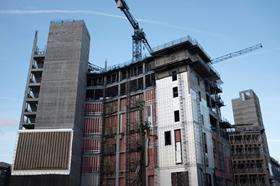 Carillion’s collpase has left the completion of two new hospitals in doubt.

The firm was the primary contractor on both the Midland Metropolitan Hospital and the Royal Liverpool Hospital (pictured) jobs.

Aidan Kehoe, chief executive at Royal Liverpool and Broadgreen University Hospitals Trust said: “We want to reassure people that the new Royal will be built and the Hospital Company has a range of options and contingency plans that are being implemented, now that Carillion have gone into liquidation.

“The Hospital Company who are contracted to deliver the project is empowered to terminate existing contracts and engage a new contractor to complete construction. They also have access to insurance funds to enable it to complete the project.

“The Hospital Company is now enacting these plans and is in discussion with PwC and other interested parties. They are also arranging for a new company to be established that Facilities Management workers will be transferred to immediately to ensure work can continue and staff and suppliers can continue to be paid.”

Toby Lewis, chief executive at Sandwell and West Birmingham Hospitals, said: “We are working closely with HM Treasury and The Hospital Company as alternative arrangements are put in place to ensure that the construction of the Midland Metropolitan Hospital is completed.

“People working for Carillion are part of our local community and we will want to do anything that we can do to support their needs and futures at this difficult time.”

Carillion is also working on Scotland’s major road project the Aberdeen Western Peripheral Route (AWPR) with Balfour Beatty and Galliford Try, but the liquidation of the contractor is expected to have minimal impact on the scheme.

“We expect that any impact on the AWPR will be mitigated by the fact that the Carillion’s construction partners are joint and severally liable and as such, the other two construction partners remain fully responsible for the completion of the works. Aberdeen Roads Limited, the construction joint venture for the project, recently confirmed that they remain committed to the delivery of this project,” A Transport Scotland spokesman said.

Balfour Beatty has said in a statement that its joint venture work with Carillion, which includes the AWPR will cost the firm up to £45m this year.

The Scottish government has said: “We are continuing to liaise with UK Government colleagues to monitor and mitigate service risks associated with Carillion’s financial situation and stand ready to offer what assistance we can at this anxious time for the company’s employees and their families.”