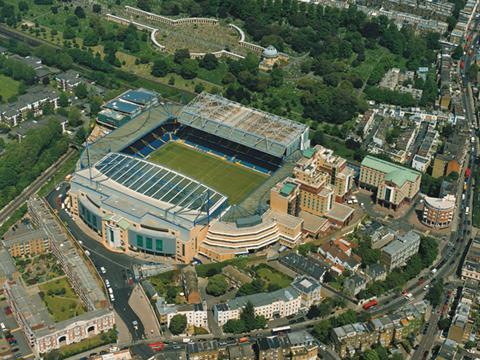 Chelsea FC has asked Lifschutz Davidson Sandilands to suggest ways of maximising the club’s Stamford Bridge ground which stands on a constrained site in west London.

The club’s owner, Roman Abramovich, has commissioned a study of the whole area inside and outside the ground.

Part of the brief is to look at the possibility of decking over the railway cuttings to the north and east which could allow the capacity of the stadium to be increased. Interventions to the Fulham Road between the Broadway and Stanford Bridge are also being considered in a bid to ease congestion on match days.

The club has been looking at moving away from its historic home in Fulham Broadway, with Battersea Power Station in the frame at one point. But a powerful supporters’ lobby has made the management focus on staying put.

In a statement Chelsea said: “This study will review the potential for improvements to publicly owned areas along Fulham Road and the area around the football ground, including the possibility of decking over the railway lines to the east and north of the ground. This could create landscaped public walkways and cycleways, while also reducing pedestrian traffic on Fulham Road and nearby streets on match days.

“The study will also assess the feasibility of an expansion of the stadium within the existing historic site boundaries, potentially to enlarge its capacity, enhance its facilities and improve the movement of people and vehicles on match and non-match days.

“As a first step, a consultation will take place with local stakeholders, including community and residents’ groups, for opinions on the existing conditions in the area.

“The consultation will not concern itself with any design or details of a redevelopment on the stadium site. Instead it will ask about the surrounding publicly owned areas and in particular the civic infrastructure necessary to ensure a successful and feasible redevelopment.”

The original stadium, designed by Archibald Leitch, opened in 1877 but has been incrementally rebuilt over the decades. KSS was responsible for most of the existing post-modern development which opened around the turn of the century.