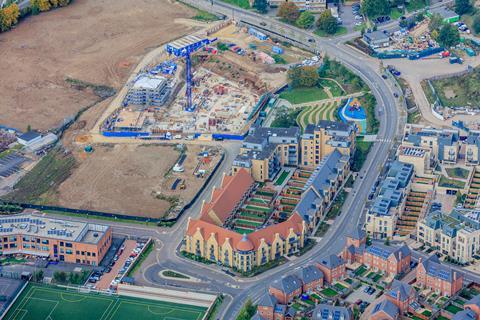 Chinese developer Poly Real Estate Group has struck a deal for its first development site in the UK after buying land on the former barracks in Mill Hill, north west London for £16.1m.

The firm, which has a pipeline of developments across Australia, the US and China, has acquired 11.8 acres of land from the Inglis Consortium to develop 706 homes including 134 deemed affordable, as well as 1,400m2 of associated commercial and retail space.

It marks the sale of the final phases of the Millbrook Park site. Work on its redevelopment began in 2011.

This is part of the transformation of the former Inglis Barracks into a new community. Millbrook Park has planning consent for 2,240 new homes, a primary school, local shops, a district energy centre and 14.8 acres of open spaces including six acres of public parks.

Arthur Wang, managing director at Poly Global, said: “This is quite a significant acquisition for Poly Real Estate Group as our first development site in the United Kingdom.

“The site has been strategically selected due to its close proximity to many popular schools, as well as benefitting from excellent transport links and fantastic amenities.

The Inglis Consortium is a partnership between St Modwen, Vinci, Annington Property and the London Borough of Barnet.

To date, hundreds of homes have been sold and occupied at Millbrook Park with Taylor Wimpey, Cala Homes, Countryside Properties and Linden Homes having completed houses in the early phases. Prime Place, Joseph Homes, Barratt and Sanctuary Group are currently on site delivering a combined 800 units, which will complete in 2023.