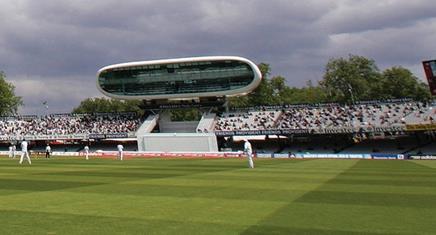 It is understood that the shortlist of five architects that was revealed in April, including BDP, Dixon Jones and Hopkins Architects, has been slimmed down to the two. A winner will be announced shortly.

The successful candidate will work on a masterplan to revamp the facilities in London and convert an on-site school into an “international cricket laboratory” to train young players.

David Chipperfield, the winner of last year’s Stirling prize, had been considered an outsider, given its relative lack of experience on sports and leisure projects compared with BDP, the architect behind the Aintree grandstand. Hopkins, which designed the Mound Stand at Lord’s had been considered a favourite for the job.

A source said: “People expected Hopkins to make it to the last stage, but I think they’re looking for someone slightly off the beaten track.”

Herzog & de Meuron, known mainly in the UK for its conversion of Bankside Power Station into the Tate Modern, designed the stadium for the 2008 Olympic Games and recently put in a planning application for a stadium for Portsmouth FC.

The judging panel is chaired by Sir John Egan, who wrote the report Rethinking Construction. Egan is also a member of the MCC, which owns Lord’s.