Scheme was called in after council’s rejection of 3,000-home development earlier this year 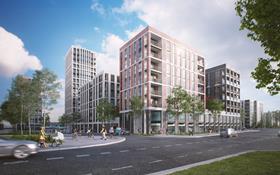 Approval has been granted for a controversial housing development in Dagenham, east London, months after a local council had sought to block the scheme.

London’s Deputy Mayor for Planning, Regeneration and Skills Jules Pipe gave the 3,000-home development (pictured), on the site of an old Ford motor assembly plant, the green light after calling in Havering council’s decision to block the project earlier this year.

The Beam Park plans in Dagenham, drawn up by architect Patel Taylor, to build 2,900 homes were deemed not good enough by the local authority, putting it at odds with neighbouring Barking and Dagenham which had already approved the project.

The development by L&Q and Countryside, had also been labelled “a blight” by councillor Graham Williamson of Havering’s Independent Residents’ Group.

Pipe confirmed earlier proposals that half the homes would be “genuinely affordable” and added: “This is a large, very important site and these plans will deliver 3,000 much-needed new homes, along with transport, schools and community facilities to help make this a liveable and attractive new neighbourhood for this part of east London.

“Having weighed up the evidence available to me and given the overall importance of the application, I have decided to grant approval.”