CityWatch: A one-horse race at the top

Galliford Try is storming ahead of its nearest rivals, helped by a strong set of results that led to a spike in its shares

It’s easy to get carried away with very short term movements in share prices but when viewed over a longer period and compared with the performance of the stock market, the results can be interesting.

Since the start of the year, there has been a massive difference in the performance of the largest listed firms in the construction sector.

Head and shoulders above the rest is Galliford Try, up by exactly 15% in the first three months of 2011. While this is still a relatively short time period, it is an impressive result, which comes even after its shares have fallen over the last month, presumably as investors took profits.

A strong set of results, which beat many analysts’ expectations, led to a spike in the firm’s shares. It is clearly doing something right and its exposure to the housebuilding and construction sectors seems to be paying dividends. That and a very tight control of costs.

Kier has been much weaker, in spite of what was also a solid set of results. Its share price just can’t seem to have a sustained break and it hasn’t moved significantly in the last three years.

The sector’s biggest firm, Balfour Beatty, has been securing contract wins in the US and Hong Kong in recent months and a general stream of positive news appears to have helped its shares outperform others. It needs these contract wins, however, as it has to keep replenishing its £15.2bn order book.

The FTSE All Share Index has had a relatively weak start, having had no clear direction either up or down. International developments have taken over as the driving force but stock rotation in the construction sector has provided positive returns for those picking out the winners.

For Galliford Try to maintain its strong performance, it will need to keep banging out the positive numbers, while Kier shareholders will hope they can convert solid results at ground level into positive returns. 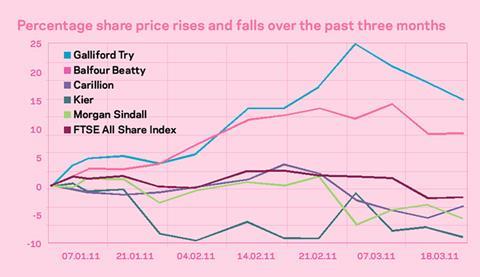