Construction and housing profits have fallen

Construction and housing stocks were hit hard this week by the turmoil in the financial markets. Some, such as Galliford Try and Barratt, are now more than 20% down in value over the month. However, for both of these firms, this sharp drop is more representative of profit-taking given their outperformance of the market in the previous six months, than any particular vulnerability to the events of the last seven days.

The surprising fact of the last seven days is that construction and development stock haven’t been hit harder by the market turmoil.

Most listed construction firms have seen their share price fall broadly in line with the market, if erring on the side of slightly under. So there were major losses over the week, but actually it could have been much worse. Some firms, including social housing contractor Mears and construction products firm Marshalls even managed to show share price gains (2% and 3% respectively) when everyone around them was losing their head on Monday.

It could have been so different. If you think back to 2008, when the credit crunch first hit, firms such as Barratt, Taylor Wimpey and other developers were quickly hit very hard indeed on their share price. However, analysts think the sector is better prepared for a crunch than it was in 2008. Kevin Cammack, a research analyst at Cenkos, says: “The difference today is that you’ve had the realisation of public sector cuts and, by and large, firms are cash rich - they’re not stretched financially like some were three years ago.”

So far none of the analysts are thinking of downgrading any of their forecasts.

However, it makes sense that the sector suffers, given the fears over financial liquidity in Europe following a worsening crisis in the Euro: if the credit markets seize up once again, there will be even less bank lending for home buyers and developers looking to get construction finance.

Expect to see volatility as the situation develops.

Firms with exposure to the US, such as Balfour Beatty, have also been amongst the worst performers, with this company down 19% in the last month.

If things get worse in Europe it’ll be the materials firms and particularly the housebuilders who will suffer first. Chris Millington, analyst at Numis Securities: “If banks start taking huge losses on their holdings in Europe, then it could seriously impair mortgage lending.”

Clearly this is an area to watch. 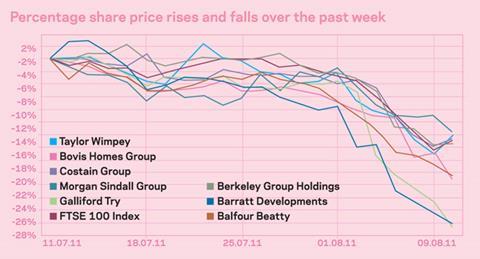