Trading was slow at the end of 2010. Was this because of adverse weather? And will things get better for the new year?

January and February are busy months on the stock market, as firms rush to update investors about current trading after their
31 December financial year end.

Mitie publishes its IMS on 31 January and its shares have risen steadily over the past few weeks. Morgan Sindall investors must wait until 22 February to hear how well it did in 2010, but its shares are outperforming its peers’, having risen 7.3% since 14 December.

Kier shares were relatively flat over Christmas, falling 0.7%. Its interims are released on 24 February.

While the actual trading figures will be watched closely, perhaps even more important are the outlook statements.

How much did poor weather in November and December hit trading? Will this slowdown continue in the weeks ahead, or was it just a blip?

Investors focus on the future, not the past, and institutions in particular will be looking towards 2012 and the potential for a recovery.

The Construction Products Association is expecting a double-dip recession for the overall sector this year but some parts will be hit much harder than others.

Comments about the impact of government spending cuts will be watched closely, as will margin performance as nearly every contractor has said they will bid only for profitable work.

Order books will fall for some as contracts won last year - and earlier - end. The hiatus in awarding new work caused by the general election and the spending review means it could be some time before domestic players see order book growth.

During the Christmas lull there were signs of action from Costain and Mouchel as well as Bouygues (see above) and there is likely to be much more corporate activity during 2011 than in 2010. 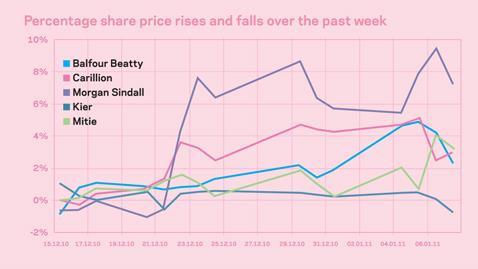