Citywatch: who believes the housebuilders?

They are opptimitic but the numbers aren’t

Can anyone explain the irrational optimism of housebuilders? They appear to have suddenly transformed themselves from the Victor Meldrews of the industry to construction’s Orphan Annies, betting their bottom dollar the sun will come out tomorrow.

Sadly, it appears the City believes it’s still the “hard knock life” and shares in Galliford Try, Taylor Wimpey and Persimmon all fell this week despite their bullish assessments of the market going forward.

Persimmon insisted the market would improve over the coming six months after revealing an almost 5% fall in sales for the first half of the year. Galliford Try reported annual housing completions up 27% and prices up 10%, and last week Taylor Wimpey said its margins were improving.

But the stabilisation-cum-improvement that everyone was looking forward to is not really supported by either the results revealed in the last fortnight or other indicators. Commenting on Taylor Wimpey’s numbers, Kevin Cammack from Cenkos Securities said: “Interestingly all of the price gains had come in Q1, none since.”

Galliford Try did increase both sales and prices, but it is worth pointing out that the bulk of its schemes are in the South-east where prices are much stronger than the rest of the country. Taylor Wimpey and Persimmon are both more exposed to the regions. The latest Hometrack report for June revealed house
prices across England and Wales declined for a second month, while the closely watched Nationwide price survey said prices were unchanged in June.

Housebuilders can make optimistic statements about government initiatives to help first time buyers get on the market and boost their sales, but the City seems to regard such initiatives with great scepticism - and overall consumer confidence remains low.

It’s not just lending constraints hurting the market, it’s overall consumer confidence. The current jobs situation, where losses are being announced on a weekly basis doesn’t encourage consumer confidence and, against the backdrop of rising inflationary pressures, wage rises are sluggish to say the least.

And while it may be a year away, there remains the threat of higher interest rates which will drive mortgage rates higher and keep more potential buyers in the rental market. Sorry Annie, the sun might not come out tomorrow after all. 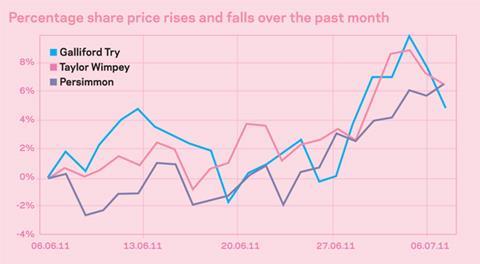