Argent and Helical pressing on to finish London jobs 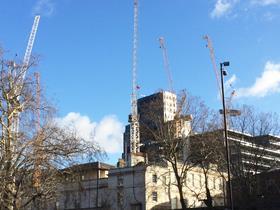 Clients at a number of Carillion’s unfinished London schemes have been in touch with subcontractors to get them back on site to complete the jobs.

Work on a large number of the failed construction giant’s private sector sites has stopped, leaving thousands of employees and subcontractors in limbo.

Kevin McLoughlin, who owns £8m turnover north London-based K&M Decorating, which was working on three projects for Carillion, including one of Google’s new buildings at King’s Cross and a mixed-use development in Farringdon called Bart’s Square, said he has been asked to return to both sites.

McLoughlin, whose firm was owed £200,000 when Carillion collapsed, said: “Argent, who is the client at the King’s Cross Google S2 [office] building and the Triplets [residential] job, were in touch and we have been given both jobs back working directly for them.

“The other client, Helical at Barts Square, have also been in touch and they’ve given us that job back as well. They told us to write down what we are owed and they will review it.”

He added: “The clients have been fantastic. They deserve credit. It’s unheard of.”

K&M returned to the Triplets scheme on Friday and McLoughlin said his firm would be back on the Google and Bart’s Square schemes in the coming weeks.

Both Argent and Helical have been contacted for comment.