An architect specialising in cross-laminated timber (CLT) buildings has warned that the government’s proposed ban on combustible cladding materials could spell the end of the construction method.

Anthony Thistleton, director of award-winning practice Waugh Thistleton, said that the proposals would stop CLT being used for the structure of residential buildings over six storeys high.

He said: “It could potentially mean a complete collapse of CLT in this country – we would go from a world leader to a backwater.”

The firm was behind London’s first housing scheme to be made from prefabricated solid timber, with the nine-storey scheme at Murray Grove in Hackney, east London, completing in 2009.

Thistleton said buildings over five storeys high were the “sweet spot” for CLT construction as it was cheaper to use other structural solutions on lower-rise buildings.

The consultation proposes that only non-combustible materials can be used in the “complete wall assembly, including the inner leaf, insulation and the facade” on residential buildings over 18m high.

The ban would also mean that foamed plastic insulation would be banned from the walls of buildings over 18m high.

Thistleton said the rapid growth of CLT construction in the UK meant it had become a world leader in this form of construction.

Waugh Thistleton was the architect for the world’s largest CLT building, Dalston Works, a 33m-high apartment block in London’s Hackney that was completed last year.

The height of buildings constructed from CLT has been steadily increasing, particularly in Hackney. The borough introduced a “timber first” planning policy in 2012 to promote the use of the material.

According to Thistleton, the use of CLT was rapidly growing because of its speed of construction, low embodied carbon content and light weight, which reduced the amount of concrete required for a building’s foundations.

The government’s consultation closes on 14 August. 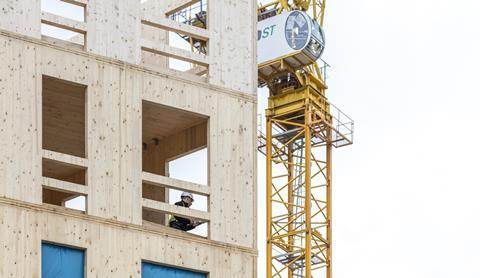 The scheme in Hackney features 121 apartments