Confusion as cost of England's Nightingale hospitals remains under wraps

Details of Welsh deals released over a month ago

The government has said it cannot say when it will reveal details about how much it has cost the taxpayer to build England’s Nightingale hospitals.

The temporary field hospitals to deal with covid-19 were built in London (pictured), Manchester, Birmingham, Exeter, Harrogate, Bristol and Washington and have been hailed for the speed with which they were put up. 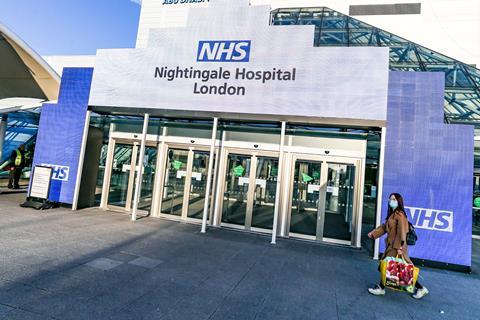 The Nightingale hospital at the ExCeL in east London had capacity for 4,000 patients when it was completed in early April but was mothballed after a few weeks

Among the firms who worked on the schemes were Vinci, Sir Robert McAlpine, Bam and Interserve.

But their price tags have not been made public and in a written answer to Labour’s shadow Cabinet Office minister Rachel Reeves, health minister Edward Argar said the health department “has indicated that it will not be possible to answer within the usual time period. An answer is being prepared and will be provided as soon as it is available."

Reeves had wanted to know why details of the construction and maintenance contracts had not yet been published.

However, across the Severn Estuary in Wales, details of the costs on similar hospitals in Cardiff and Swansea have now been in the public doman for more than a month.

NHS Wales Shared Services Partnership said the construction services contract for the Dragon’s Heart Hospital in the Welsh capital was worth £25m.

The deal, which was handed to ES Global, was for the conversion of Cardiff’s Principality Stadium -better known as the home of the Welsh rugby union team - into a 2,000-bed temporary field hospital.

And Kier’s contract to turn a disused film studio in Swansea into an 850-bed field hospital was put at between £10m and £15m.