Details of deals worth up to £40m revealed

The cost of building two covid-19 hospitals in Wales has been revealed.

A pair of notices published to the Official Journal have revealed details of the contracts awarded to build the Dragon’s Heart Hospital in Cardiff (pictured) and for the alterations and conversion of Bay Studios in Swansea into a surge hospital. 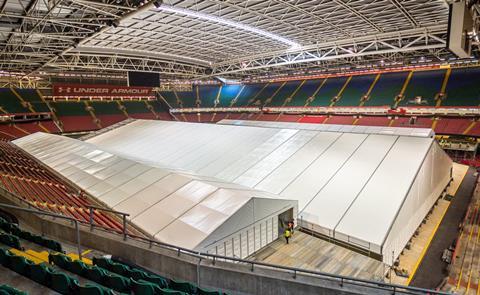 The deal, which was handed to ES Global limited, was for the conversion of Principality Stadium in the Cardiff City Centre into a temporary field hospital that could accommodate up to 2,000 additional beds for covid-19.

The notice said: "ES Global Limited was retained for the construction works adaption of Principality Stadium into a temporary field hospital.

"In these exceptional circumstances, there was no time to run an accelerated procedure in line with Public Contracts Regulations as a facility for additional capacity was directly required to be built or adapted and equipped for swift healthcare provision."

The facility, which was opened by Prince Charles opened in late April, accepted its first 12 patients on 29 April.

The overall number of patients treated at the facility, which is the second largest temporary hospital after the one built at London ExCel, is unclear.

Meanwhile the contract to convert Bay Studios in Swansea was revealed to be worth £10m and £15m.

Kier, was the main contractor on the job, while TRJ was providing civil engineering and demolition services.

The contract award notice, which was published by Swansea council, said: "Due to time constraints from the urgent requirement of this facility it was not possible to undertake a tendering exercise and so two contractors from the South West Wales Regional Contractor’s Framework 2020 were approached to confirm capacity to carry out the works.

"Swansea council are the principal contractor and both Kier Construction Ltd and TRJ are both subcontractors."

It said while it was not possible to establish a contract sum due to the emergency nature of the works the estimated outturn costs will be between £10m and £15m combined for both contracts.

The full costs associated with this contract will be reimbursed by the Swansea Bay University Health Board.

Kier handed over the first phase of the hospital earlier this month, and while it is unclear if it has treated any patients there are talks about keeping the facility running beyond the end of the coronavirus pandemic.

Speaking at 7 May virtual meeting of Swansea council meeting, leader Rob Stewart said the field hospital was "likely" to be needed at some point given the mortality rate of coronavirus, even if it wasn't needed at the moment.

He said: "All of us hope that we will not need a single bed of this facility during this crisis because we would all rather that the surge hospitals are not needed, but unfortunately, given the tragic death rates we are seeing across the UK, it is likely that at some point in the future it will be."