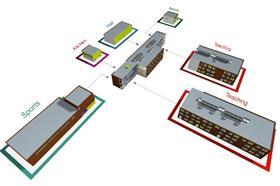 Contractors responded with caution to the government’s baseline school designs published this week, while RIBA slammed the plans.

The move came in response to Sebastian James’ review of education capital and forms a key part of the government’s plan to cut 30% of the cost of school building through greater standardisation in the design and build process.

As first revealed by Building in February, the designs see a reduction of the overall gross area averaging 15% in secondary schools and 5% in primary schools.

The DfE said the designs could realise up to £6m in savings per secondary school compared to the previous government’s Building Schools for the Future programme - and with 100 secondary schools in the PSBP that could lead to as much as £600m in savings.

Contractors cautiously welcomed the proposals, particularly the EFA’s insistence that design and build teams would still be able to innovate within the new parameters and develop their own proposals.

Galliford Try Education director Michael Buchanan said contractors should be able to meet the new cost target of £1,465 per sqm, as that’s what has been delivered over the past 18 months through EFA’s schools framework.

“We are pleased that the EFA have confirmed their invitation to industry to step up to the plate and offer alternative designs which meet or exceed the baselines,” he said.

David Large, Interserve director, said his “first take” on the schools was that they were “very compact” and it may be difficult to “sell” to head teachers.

He said the schools lacked the flexibility of other standardised proposals developed by contractors, such as Interserve’s own PodSolve standardised school model.

Steve Loughe, Bam design director said: “While we share some of the concerns over the proposed reductions in area, it does not necessarily mean the end of well -designed schools or a reliance on flat-pack, standardised  solutions.

“BAM have developed good affordable designs within the new space limits which provide excellent teaching and learning facilities based on traditional construction methods, which allow clients to have a big input into the design of their buildings,” he said.

However, the RIBA launched a stinging attack on the designs, warning the proposals, were short-sighted and restrictive, and risk designing in bad-behaviour on the part of pupils as well as neglecting the needs of the disabled.

RIBA said the one-size-fits-all approach to delivering the next generation of schools was likely to create buildings that quickly became redundant, while reduced space for communal areas was likely to increase discipline problems – including bullying, countering current best practice in design.

Nusrat Faizullah, chief executive of the British Council for School Environments, said new standards on light, temperature and ventilation, based on post-occupancy evaluation of school buildings, were welcome, but she added:“The key question remains – will these designs ensure new school buildings are fit for purpose?

“A shrinkage in space means less flexibility for those that use them, inhibiting innovation. Decent spaces mean more room to learn new and broader skills.”

The designs in brief