Four set to be shortlisted for Heneghan Peng scheme

Contractors are being readied for a £51m (€60m) job at Technological University Dublin.

The university is looking to shortlist four contractors for the job, which will involve building a seven-storey facility designed by Heneghan Peng Architects. 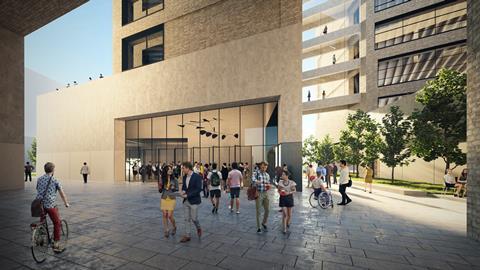 The 21,000m2 West Quad building (pictured) will be the new home of the university’s business college and languages and law school.

It will also include a third-level learning and work space, as well as TU Dublin’s new exam and conferring hall.

Firms have until 20 February to register their interest in the project that is part of the university’s new campus, which is being developed in Grangegorman in the Irish capital’s north.

It comes a month after TU Dublin launched its search for a firm to build a £40m academic hub and library at the campus.

The university is looking to shortlist five main contractors for the job, which will involve building the O’Donnell + Tuomey-designed library and student support centre.

Shortlisted bidders are due to be notified in the first week of April.

Both projects are due to be finished in 2022.