Department for Transport gives Transport for London the green light 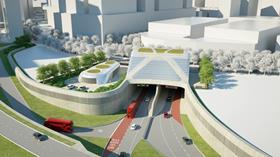 Transport for London has received been given the go-ahead for its £1bn Silvertown Tunnel.

TfL has been granted a development consent order by the Department for Transport, to deliver the a new twin-bore road tunnel under the Thames in east London.

TfL will also be progressing with procurement of a contractor to design and build the tunnel, with a look to confirm a preferred bidder in winter 2018 and award the contract in early 2019 so that construction can begin later next year.

Two bidders, Spanish firm Cintra Global, owned by Ferrovial, and Hochtief PPP Solutions, have been shortlisted to design and build the tunnel and will be required to show how they can deliver a range of measures to reduce construction impacts as part of the tender process.

Mayor of London Sadiq Khan said: “I’m delighted that the green light has been given to progress with the Silvertown Tunnel. New river crossings are vital for the future prosperity of east London, and the scheme will have a substantial impact unlocking new jobs and economic growth, while easing congestion and poor air quality in the area.

“Since I became Mayor I’ve been determined to ensure the Silvertown Tunnel doesn’t have a detrimental impact on our environment. That’s why the new plans have such a focus on cleaner transport, with only buses with the highest emission standard using the tunnel, and substantial investment in pedestrian and cycling infrastructure.”

The news has received a mixed reception, with Green Party Baroness, Jenny Jones slamming the decision.

She said: “The decision by the government to support the Mayor of London’s new road tunnel under the Thames is a blow to the thousands of people who will be impacted by the pollution it generates.

“The Mayor’s justification for the road is that the tolls will keep a cap on the vehicle numbers, but that hasn’t stopped millions of cars using the Dartford Crossing each year and these tolls won’t stop traffic jams forming in east London.

“Some of the most deprived communities in east London, who do not drive, will have their lives and health blighted by this new road.”

He said: “This is great news for the areas to the north and the south of the Thames and should be celebrated by London as a whole. Hopefully it is just the start with more crossings east of Tower Bridge to come.

“The river crossing will help regeneration and act as a new gateway in East London, taking pressure off the jammed Blackwall Tunnel. It is crucial that the tunnel will be designed for a long lifespan, well over a century.”