Members of Tower Hamlets council’s strategic development committee have unanimously approved the proposals, which will see most of the area’s buildings demolished except for a core of groundbreaking post-war structures.

The decision paves the way for the delivery of a 19-building mixed-use scheme with 643 homes and around 18,000sq m of new non-residential space, including shops, cafes and a cinema for client housing association Poplar Harca and Telford Homes.

At the heart of Chrisp Street are buildings designed by Frederick Gibberd that were built as part of the Festival of Britain “Live Architecture Exhibition” in 1951, and which form one of the country’s first pedestrian shopping areas. They include Chrisp Street’s Clock Tower and the Festival Inn pub, which both obtained grade II listing during the application process. 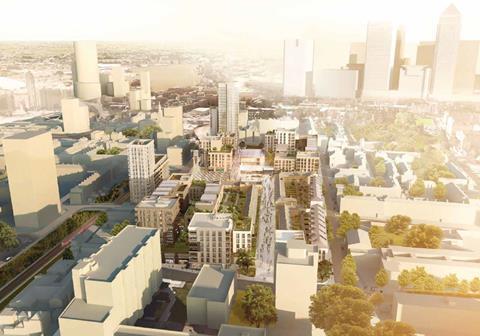 Sheppard Robson’s scheme includes the provision of a new canopy and service building for the Market Square, and refurbishment for retained Festival of Britain buildings on Market Way and the north side of Market Square, which include shops and 43 homes.

Government heritage adviser Historic England said it was happy for Tower Hamlets to determine the application in accordance with local planning guidelines.

But the 20th Century Society raised concerns about the impact of the height of Sheppard Robson’s proposed new buildings on the retained Festival of Britain buildings. It also called for the retention of Fitzgerald House, which is the market’s current tallest building.

Council officers recommended the plans for approval, saying: “Officers consider that the substantial public benefits outweigh the less than substantial harm to heritage assets and the application is acceptable in design terms.”

London mayor Sadiq Khan is due to have the final say on the scheme because of the size of the project.