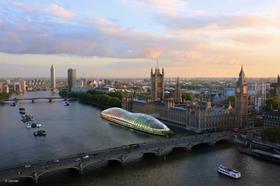 Labour leader Jeremy Corbyn has told Building that proposals to create a temporary floating parliament building while vital repair work at the Palace of Westminster is carried out should be seriously looked at.

Work to save the crumbling grade I-listed buildings is expected to cost £4bn and take between five and eight years to complete.

But US architect Gensler has come up with an alternative plan – a floating Houses of Parliament on the Thames – which it said would save over £1.8bn because costly refurbishment work to accommodate MPs and peers in their new homes would not be needed.

Corbyn said the plan should be looked at as “a proper option” and added: “There are suggestions [about relocating]: one of which is to move to an adjacent building and reconstruct a parliamentary chamber there.

“The other, which is a very interesting proposal, is of a floating parliament anchored alongside. I must say, I’ve only seen the outline drawings of it, but I think it’s of merit and should be looked at.”

Corbyn said it was vital to retain the palace as the home of British democracy - despite criticism the final bill is too high.

He added: “I do think we should preserve our ancient buildings in this country, and we’re quite good at that.

“There is also a suggestion of parliament travelling around the country, which anyone who is not from London always thinks is a good idea but I think is not likely to happen any time soon.”

But another Westminster MP, Alex Salmond, the former first minister for Scotland, rubbished the suggestion and said parliament should be relocated to the north of England and the Palace of Westminster turned into a museum piece.

Salmond, who opposed the construction of the Scottish Parliament in Holyrood, Edinburgh, said the costs of updating the building to make it compliant with modern technology was not worth the money.

The SNP MP added: “The cost to make it compliant with modern technology is horrendous.”

An Olympic-style delivery authority will oversee the proposed repair work which both houses have to vote on before it can begin. This delivery authority is likely to be supported by the winners of two client advisory roles parliament has been procuring.