Costain hopes for return to glory days after £20m profit 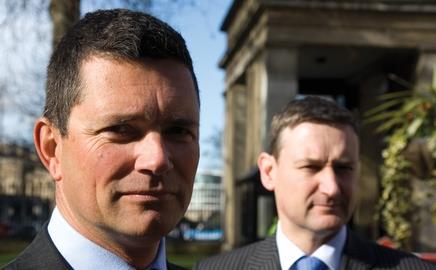 “If Costain were a football club, it would have to be Newcastle Utd,” says Panmure Gordon analyst Andy Brown. “A big name once, but one that really should be doing a lot better by now.”

Like the Magpies, Costain insists it belongs in the “premier league” of contractors. Founded in 1865, it is the UK’s oldest and one that has a proud history. But it has struggled in recent years and even teetered on the brink of bankruptcy in the mid-nineties.

Now, in similar fashion to the fervent fanbase on Tyneside, there are many who believe the glory days are coming back. Last week the company posted full-year pre-tax profit of £19.8m, not bad considering the previous year’s £61.7m plunge into the red.

Andrew Wyllie, Costain’s chief executive (pictured, left), says: “It’s the first time since 1990 that every division has delivered a profit.” Not quite Kevin Keegan, but welcome relief for investors.

The return to profit follows a root and branch restructuring of the business. Under Wyllie, Costain has left unprofitable areas and its international division, focusing almost exclusively on government and blue-chip infrastructure work in the domestic sector.

The company’s cash reserves have more than doubled, to £133m thanks to last year’s £60m rights issue, and increased debt facilities give it a further £200m to draw on. And as Wyllie said, all its divisions are in the black, even its troublesome oil and gas unit, which has been leaking cash for more than six years. Meanwhile, repeat orders are up to 80% from 70%.

As a result, finance director Tony Bickerstaff (pictured, above) was able to announce the company’s first dividend in 17 years, giving £3m back to shareholders. Following the results, Dresdner Kleinwort said that “there could be a rally in the share price now the dust has settled post-rights issue”.

But not everyone is convinced. Costain’s share price remains in a miserable state. The company is trading just above its year low of 18p at 21.25p, which is a long way off the 12-month peak of 46.63p.

Brown says uncertainty about the Spanish property market, where Costain has a joint venture with the Banesto bank, and earnings dilution from the rights issue has made it a less attractive proposition. “With more visible earnings growth elsewhere, our stock preference remains away from Costain,” he says.

It is worth pointing out, too, that Costain’s bottom line was helped by a £5.7m contribution from the disposal of a couple of PFI stakes – Bridgend prison and a road project called Sirhowy Enterprise Way.

But the big question for Costain is whether it will enter the booming global infrastructure market.

Stephen Wells, the firm’s business developer director, says: “I think at the moment our aspiration is to be a business with 80% of its work in the UK and 20% internationally,” he says. “International markets are tricky, and one-off projects abroad aren’t our style.”

Costain is perennially linked with takeover speculation in the Square Mile. Just three shareholders account for more than 52% of its ownershio, with the lion’s share controlled by Malaysian contractor UEM Builder, and the Kuwait-based Kharafi family.

Wyllie insists that UEM and Kharafi “are both in it for the long term”, but the attractions of steady earnings from PFI and the amount of cash generally going into infrastructure work, increases the likelihood that a bid could come sooner rather than later.

What the city says

Arbuthnot: “The company delivered on its promises. An added bonus is that its customers are not the sort who will slow spending if the economy turns.”

Kaupthing: “Recovery stock? Yes, but given the battering many in the sector have taken in price terms, you could easily list Galliford Try, Kier, Rok, Morgan Sindall in the same camp.”

For more on Costain go to www.building.co.uk/archive