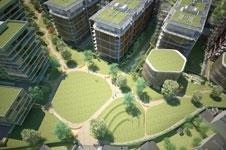 Culture secretary Ben Bradshaw has weighed into the Chelsea Barracks debate with a barely concealed attack on Prince Charles’ opposition to the modernist schemes.

Speaking to the Sunday Telegraph, Bradshaw said he “would be worried” if schemes were being scrapped because of “any one individual”.

In response to questions about the ongoing wrangle over Richard Rogers’ abandoned designs for Qatari Diar’s Chelsea Barracks redevelopment, the minister said: "I think British architecture is in a fantastic state and I think it is really important that we celebrate modern architecture.

"British architects are not only widely lauded at home but they are lauded and recognised overseas as the best in the world. We have some great modern architecture and I would be worried if great schemes were being jeopardised or scuppered because of the opposition of any one individual."

Richard Rogers has always insisted that a personal letter from Prince Charles to the Emir of Qatar in which he listed grievances about the modernist design and offered an alternative design by Quinlan Terry was instrumental in him being removed from the project.

Last week it emerged that his practice, Rogers Stirk Harbour + Partners, is considering legal action against Qatari Diar over £2m in unpaid fees.