Construction and property consultancy Cyril Sweett said full-year results are likely to be lower than expected due to lower operating margins in the UK and tough trading conditions in the second quarter.

Sweett said the extra bank holiday in April and fallout from the Arab Spring had impacted adversely on profit.

While a number of Sweett projects in the Middle East have been cancelled, the company is recruiting in the region. It reported a strong performance in China, and expanded operations into Vietnam and Thailand in the year to date. Staffing across the Asia Pacific region is up to 520 people.

Addressing the company’s UK performance, chief executive Dean Webster said: “Margins are under pressure and work is being won at lower margins now. We need to look at reducing our administration costs […] in areas that are not performing or that are not delivering fees at economic levels.”

He admitted the company’s 480-strong UK arm could see job losses, but said Sweett was “looking across the cost base as a whole, not just staff”.

Stock analyst Charles Stanley Securities said it had reduced pre-tax profit expectations for the year to March 2012 by 20% to £3m, down from £3.8m. Equity analyst Peter Ashworth said the company’s order book was still “reasonably strong”.

Analyst Northland Capital Partners noted that Cyril Sweett had “direct exposure to Libya and Egypt, two countries most impacted by the geopolitical unrest”, but said it was in the process of diversifying into the UAE, particularly Saudi Arabia. 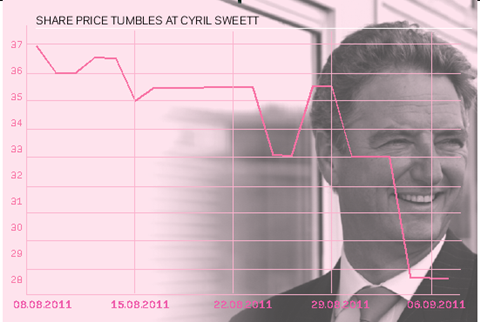